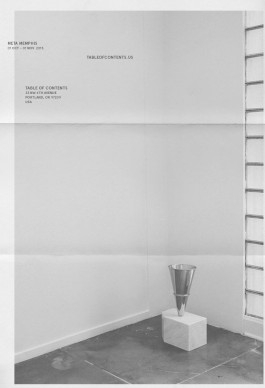 In 1987 the cadre of global designers working collectively as Memphis announced that they would no longer develop new work under that banner. The movement launched at Milan’s Arc ’74 showroom in 1981 came to a close. The legacy of Memphis, and the organization responsible for its preservation and continued distribution did, however, live on.

This organization, Memphis s.r.l., was formed in June of 1981, several months after the initial meetings at which the founding members of Memphis planned their opening salvo into the field of contemporary design. Its mission was to provide the funding and distribution necessary to realize a collection of commercial products free of any precedent or proven market viability. Its forward-looking benefactor, Ernesto Gismondi, took on the role of president and majority shareholder of the new organization.

The departure of the original team of designers who had launched the Memphis movement left the company in a challenging position. The initial collective had effected such a remarkable upheaval in contemporary culture that to continue the project without them would be unthinkable. It was thus determined that for Memphis to continue, it would have to do so in a new form, under a new name: Meta Memphis.

To distinguish this new iteration, art director Carlotta De Bevilacqua and gallerist Giorgio Persono were selected to invite a cast of contemporary artists to collaborate on a collection of functional objects. Ten artists—Alighieri e Boetti, Pier Paolo Calzolari, Sandro Chia, Joseph Kosuth, Maurizio Mochetti, Mimmo Paladino, Michelangelo Pistoletto, Susana Solano, Lawrence Weiner, and Franz West—were invited to contribute to the first collection, which was exhibited at the Palazzo Querini Stampalia in Venice from June 1-18, 1989. A second collection was produced in 1991 with new work from many of the initial contributors, as well as additional artists, including Marco Bagnoli, Mathis Esterhazy, Sol LeWitt, Gerhard Merz, Juliao Sarmento, and Bill Woodrow.

The Meta Memphis collection is a departure from the original Memphis project in that many of the pieces have been limited to editions of 25, rather than remaining uneditioned consumer products. There is a continuity, however, in the spirit with which Meta Memphis approaches objects, a spirit that Barbara Radice describes as an awareness that “an object exists as a system of signs, as a catalyst of emotions, as a representation of a cultural state, as a container of values or information that one wants to possess, as an active presence, a reassuring wink—in other words, as an instrument of communication.”